CVS to Buy Aetna for $69 Billion 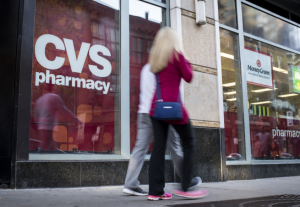 CVS Health Corp. agreed to buy Aetna Inc. for about $69 billion in cash and stock in a move to transform the pharmacy company and capture more of what consumers spend on health care.​

Aetna stockholders are to receive $207 per share—$145 in cash and 0.8378 of a CVS share, or $62, in stock, the companies announced Sunday. That represents a premium of about 29% to where Aetna shares were trading before The Wall Street Journal reported that the companies were in talks in October.

The proposed deal is the latest and most dramatic sign of how the lines between traditional segments in health care are blurring as companies, saddled with mature businesses and in many cases restricted from buying rivals, enter new areas in search of growth.

Companies from insurers to hospital chains are also looking for ways to squeeze costs and bolster their leverage against other players in the food chain. That is creating opportunities, but also new fault lines as companies find themselves competing against erstwhile partners.

“Everyone’s moving into one another’s space to position themselves for whatever happens,” said Lawton Robert Burns, a professor at the University of Pennsylvania’s Wharton School.

The chief executives of CVS and Aetna said in a joint interview that by pairing Aetna’s medical expertise with CVS’s ubiquitous physical-store presence, the new company would be well positioned to curtail runaway health-care costs.

These costs are growing at “an unsustainable rate,” CVS’s Larry Merlo said in the interview. The combined company “can meet an unmet need in terms of improving access and reducing cost and helping people achieve their best health.”

Combining Aetna’s vast trove of data with CVS’s retail expertise will enable better treatment of costly chronic diseases, Aetna’s Mark T. Bertolini said. “This is about how to get the payer more involved at the local level,” he said. “As we look at 50% of the population driving 80% of cost, we need to find a more convenient and more effective way to meet customers’ needs.”

Mr. Merlo will be chief executive of the combined company, which will maintain Aetna as a standalone unit. Mr. Bertolini won’t have an operational role, though he will take a seat on the CVS board along with two other Aetna directors.

The deal—the biggest announced in more than a year—pulls together two giants from very different corners of the health-care industry. CVS, with annual revenue of $178 billion, is a major pharmacy-benefits manager in addition to operating a vast collection of drugstores, some of which already have retail clinics. Aetna, with revenue of around $63 billion, is the third-largest U.S. health insurer, providing coverage to around 22.2 million members enrolled in employer, Medicare, Medicaid and other plans.

The logic of the deal centers on a plan to use CVS’s nearly 10,000 U.S. pharmacy locations to provide consumers with more local care options. CVS, which has for years been seeking to move further into health care, plans to repurpose portions of its pharmacies so they become community health centers where customers can get answers about their health and coverage—and how to manage the cost of it, the companies said. The pharmacies will have space dedicated to wellness and could provide services in areas like vision, hearing and nutrition.

The locations will be staffed variously by pharmacists, nurse practitioners and experts such as nutritionists. It is possible they will one day include physicians, Mr. Merlo said, though there are no immediate plans for that.

Both companies have challenges in their core operations.

CVS faces the potential threat of Amazon.com Inc., which may enter the pharmacy business. The company’s retail business accounts for a shrinking share of its overall sales, with most revenue now coming from its pharmacy-benefits manager, which acts as a middleman overseeing drug-benefit plans for employers and insurers.

An antitrust challenge led Aetna earlier this year to give up its planned acquisition of Humana Inc. and the insurer has retreated from the unprofitable Affordable Care Act exchange business, leaving it with an unclear path to future growth, analysts say. It also lacks the diversity of larger rival UnitedHealth GroupInc., which has a fast-expanding health-services arm that includes a pharmacy-benefits manager as well as doctor practices and surgery centers.

“This transaction is about growth and expansion, not contraction,” Mr. Merlo said. The companies expect $750 million in “near-term synergies” from the deal.

The combination faces substantial challenges, including the huge operational task of knitting together the companies’ diverse operations so that customer experiences are smooth and seamless. The deal isn’t likely to deliver as many cost-cutting benefits as combinations with more direct overlap, such as Aetna’s scuttled bid to buy Humana, analysts said.

It must also pass muster with regulators, which isn’t a sure thing especially after the Justice Department sued to block AT&T Inc.’s planned purchase of Time Warner Inc., another so-called vertical combination of companies in different parts of a supply chain.

Mr. Bertolini said the companies had looked at the AT&T challenge “very thoroughly” and that the proposed tie-up was fundamentally different from an antitrust perspective.

Barclays, Goldman and Bank of America Corp. are providing $49 billion of debt financing.